Who is seeing it in theatres? I am!

I am not sure what is happening in it so I have to go read the wiki page about the film!

Have you seen "Downton Abbey II: A New Era?".

If so, what do you think about the second movie? Do you prefer the tv show or the 2 movies? :)

Let’s say the UK government passed a law saying women can succeed as nobles in the 1910s. So, after James and Patrick died, Mary would technically be the heir. But what if Robert died and Mathew became the Earl. Would he and Mary be co-nobles?

Real glad we get to see the sarcastic Lady Rosalind again. The children better have more important roles instead of "just being there" as cameos on the sidelines!!

I mean, Miss Sybil is eight years old now, Master George is seven, Miss Marigold is either five or six and seriously needs to be speaking; it's not like she is mute.

During the course of its six-year run, Downton Abbey was quite skilled at developing complex, fully realized characters. Almost no one was wholly good or wholly bad; almost everyone had their faults and flaws, but also their highs and positive traits. One character who was decidedly not nuanced, and nothing but an absolute villain, was Mr. Bates' first wife, Vera Bates. Despite their estrangement, Vera refused to let her husband move on.

She went to great lengths to prevent Bates from achieving the happiness he deserved—truly making one of the most shocking, villainous decisions in the entire series. She committed suicide by eating a poisoned pie she made herself just so that Bates would wind up accused of murdering her and be sent to prison for a crime he never committed.

Did anyone else notice that babies were accompanied by death? Sybbie is born, Sybil dies. George is born, Matthew dies. Edith gets pregnant, Michael dies. 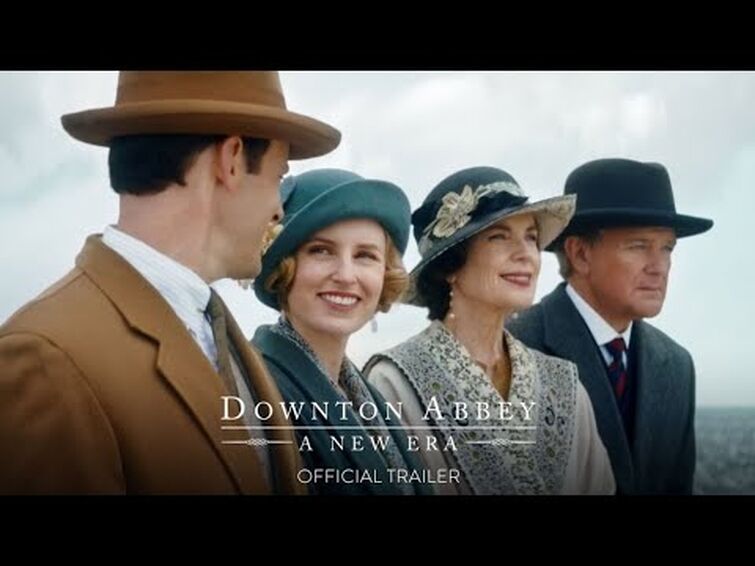 DOWNTON ABBEY: A NEW ERA - Official Trailer [HD] - Only in Theaters May 20YouTube

Was anyone superised that in the trailer that downton was a set in the movie and they were filming in a new era?

I missed the part where Thomas discovered about "Her Lordship's soap" to then give that piece of information to Mr. Bates. There were no witnesses, were there? She didn't confess to anyone, did she?

So I just finished rewatching the 2019 film and I have a couple of questions about titles.

Now, within the Crawley Family, Edith outranks them all as the Marchioness of Hexham. Followed by the Earl and Countess of Grantham, than Lord and Lady Merton, followed by Lady Mary Talbot and then potentially the Dowager Countess?

But my question is, as the Hexham’s are of a higher rank, does that mean the the Earl of Grantham uses ‘My Lord’ when referring to Marquess of Hexham. If that is the case, is there evidence of that in the show?

I know when the the girls were visiting Princess Mary in the film, they were in rank order but when the King and Queen visited, there was no order.

Thank you in advance 😊

Why was the Granthams' heir, Mathew, fighting in the front line, even doing reconnaissance? Surely, it's not very realistic – or is it?

Why did Carlisle threaten to reveal the information about Lavinia? What did he try to coerce her to do (or not do)? I may have missed something, but I checked his fandom page and didn't find any clarifications

I didn't understand that part about Vera's blackmailing. Who was Lady Flintshire (no fandom page on her, "his lordship's cousin" doesn't tell me much). Why was Bates's name a big deal with her so that she employed his wife. Why did Lady Flintshire know about Mary's fling with the Turk (from the embassy people? did she have something to do with it?)? Why didn't Vera wish to get her half of the divorce settlement and start a new family? Plus, there wasn't, from my perspective, any way for her to know about Anna's involvment because Edith knew the story from Daisy, and Daisy, as far as I could tell, didn't see Anna. As per my recollection, she only saw Cora. I'm confused

I've just started watching the series but so far struggle to follow the plot (I've read its summary here on fandom, it didn't make things clear for me). These concepts of "entail" and everything are not familiar to me at all (I hadn't even realised it was a noun in English as well before I watched the first episode). So Lord Grantham's two heirs presumably drowned following Titanic's sinking. I get it. And then the house and Lord's wife's money, because of some arrangement called "entail", were going to be inherited along with the title by his distant relative. It's a big deal, isn't it? Good news he could "break" the entail and make his elder daughter Mary the heiress to the house (but not the title, right?). But the earl refuses to "break" the entail because he "cannot ruin the estate or hollow out the title for the sake of Mary" (and so that gay duke stops short of proposing to Mary after discovering she's not going to be the heir, ok, I get it). But what did Lord Grantham mean by that? What crucial drawbacks would breaking the entail have that made him make that decision?

One might wonder why a healthy young man in his prime just keeled over and died for no apparent reason. Here’s a possible plot twist. Earlier in the evening, Thomas made a pass at him and revealed himself to be gay (which, at that time would be a jail-able and or ruinous offense). Makes me wonder if Thomas poisoned him, or at least attempted to make him sick enough to leave? He certainly would have the motive and opportunity and he seemed to have no problem with subterfuge.