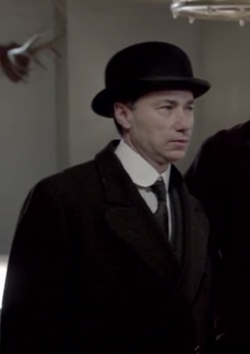 Arresting Officer: "John Bates?"
Mr Bates: "Yes."
Arresting Officer: "You are under arrest on the charge of wilful murder. You are not obliged to say anything unless you desire to do so. Whatever you say will be taken down in writing and may be given in evidence against you upon your trial."
— Episode 2.08

The arresting officer is the police office who arrests John Bates for the murder of his wife following his return from the funeral for Lavinia Swire.

Retrieved from "https://downtonabbey.fandom.com/wiki/Arresting_Officer?oldid=51825"
Community content is available under CC-BY-SA unless otherwise noted.