Caxton Hall is a building on the corner of Caxton Street and Palmer Street, in Westminster, London, England. Rose MacClare marries Atticus Aldridge at the register's office in Caxton Hall in October of 1924 (episode 5.08). 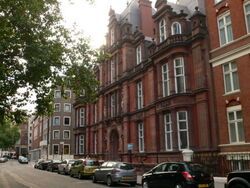 Caxton Hall hosted many mainstream and fringe political and artistic events and after the Second World War was the most popular register office used by high society and celebrities who required a civil marriage.

It was designed in 1878 by William Lee and F.J. Smith in an ornate Francois I style using red brick and pink sandstone, with slate roofs. It won the competition for a hall design set by the parishes of St Margaret and St John; and was originally called the Westminster City Hall. A central entrance porch and canopy were added in the mid-20th century, now removed.

It was opened as Westminster Town Hall in 1883 and contained two public halls known as the Great & York Halls. They were used for a variety of purposes including musical concerts and as a venue for public meetings. It was also used as a central London register office until 1979.

It was redeveloped as apartments and offices in 2006. The facade and former register office at the front of the building facing Caxton Street were restored and retained being converted into luxury flats. The rear of the building, containing the halls, was demolished and a circular office building, named the Asticus Building, was built on the site.

Retrieved from "https://downtonabbey.fandom.com/wiki/Caxton_Hall?oldid=53488"
Community content is available under CC-BY-SA unless otherwise noted.