Downton Abbey is a period drama television series set and filmed in Britain and created and principally written by Julian Fellowes. It features an ensemble cast and premièred in the UK on ITV on the 26th September 2010 and in the USA on PBS on the 9th January 2011. It is co-produced by British production company Carnival Films and the American Masterpiece. The executive producers are Julian Fellowes, Gareth Neame and Rebecca Eaton.

The series is set during the post-Edwardian era (after Edward VII's death) and depicts how major historical events such as the sinking of the RMS Titanic, the First World War and the Spanish influenza pandemic affect the fictional estate of Downton Abbey in Yorkshire.

Reception of the programme was predominantly positive; ratings were extremely high for what is usually considered a 'genre' show, and the first series picked up a number of awards and nominations after its initial run. It was also nominated for the Audience Award Bafta in 2011 but lost to reality show, The Only Way is Essex. It has subsequently become the most successful British costume drama since the 1981 television serial version of Brideshead Revisited, and in 2011 it entered the Guinness Book of World Records as the 'most critically acclaimed television show' for the year, becoming the first British show to win the award. It has become a worldwide phenomenon sold to 220 territories worldwide, with 120 million viewers. [1][2]

On the 3rd November 2011, ITV confirmed that a third series had been commissioned and would air from September 2012. Series three premièred in the UK on the 16th September, 2012, and premièred in the US on the 6th January, 2013. The consolidated ratings averaged 11.9 million viewers for series three which equates to a 40% share of the available audience. This makes Downton Abbey one of the most popular dramas in recent memory. The final episode of series three also achieved over 12 million viewers.[1]

The series is set in the fictional Downton Abbey, a Yorkshire country house of the Earl and Countess of Grantham, and follows the lives of the aristocratic Crawley family and their servants early in the reign of George V. The first series spans the two years prior to the Great War, commencing with news of the sinking of the RMS Titanic, an event that sets the story in motion.

Highclere Castle in Hampshire was used for exterior shots of Downton Abbey as well as for some of the interior filming, with the servants' living areas constructed and filmed at Ealing Studios.

The village of Bampton in Oxfordshire was used for filming the outdoor scenes, most notably St. Mary's Church and the village library, which serves as the entrance to the cottage hospital. The North Yorkshire towns of Malton, Easingwold, Kirkby, Kirkbymoorside, Middlesbrough, Ripon and Richmond have also been mentioned by characters in the series.

The first series cost an estimated £1 million per episode, and is the most successful British period drama since Brideshead Revisited, with British ratings exceeding 10 million viewers. The series was also well received in the United States, averaging over 6 million viewers per episode.

The first series started on 26 September 2010, and explored the lives of the Crawley family and their staff from the day after the sinking of the RMS Titanic in April 1912 to the outbreak of the First World War on 4 August 1914. Much of the focus is on the need for a male heir to the Grantham estate, and the troubled love life of Lady Mary as she attempts to find herself a suitable husband. The device that sets the drama in motion is the entail that accompanies the (fictional) Earldom of Grantham, which endows both title and estate exclusively to male heirs. This is complicated by the fact that the estate had been near financial ruin, and was only saved when the present Earl, then the heir apparent, contracted a wealthy marriage with an extremely rich American heiress. Upon marriage, her considerable fortune was contractually incorporated into the comital entail in perpetuity. The Earl, having had only three daughters and no son, had arranged for his elder daughter to marry her cousin, and son to the heir presumptive, thus keeping both title and estate within the immediate family. The demise of both heirs presumptive in the sinking of the Titanic destroys the family plans and brings a distant cousin, a young solicitor from Manchester, in line to inherit everything, including the personal wealth of the Countess, who will not be able to bequeath it to her daughters.

In 2010, Laura Mackie, ITV Director of Drama Commissioning, confirmed that the drama would return for a second series in 2011:

We're delighted with the audience response to Downton Abbey and the positive critical reaction. We're extremely proud to have commissioned a series, which has clearly captivated ITV1 viewers. Consequently, we're thrilled to be announcing the recommission of a new series for 2011 which will allow us to spend more time with the Crawley family and their servants.

This series consists of 8 episodes plus a Christmas special spanning the years 1916 - 1920, and follows the lives of the Crawley family and their servants. The second series premiered in the UK on 18 September 2011, and in the U.S. on 8 January 2012.

It was confirmed at the preview of the second series, at Highclere Castle on 29 July 2011, that Julian Fellowes was working on a third series, set after the Armistice and during the 1920s. Actress Amy Nuttall who played Ethel Parks did not return for the third series. ITV confirmed the commissioning of a third series on 3 November 2011. The cast started filming in February 2012, and the series aired in September 2012. Fellowes stated that in series three, there was going to be a storyline about Catholicism.

New cast members were announce for series three; actress Shirley MacLaine joined the series playing the role of Cora Crawley's mother, Martha Levinson. Actor Matt Milne has been cast to play the role of Alfred Nugent, Alfred is the nephew of Sarah O'Brien's and the new footman.

This series once again consists of 8 episodes and a Christmas special and spans the years 1922 - 1923. The fourth series premiered in September 2013 in the UK, and January 2014 in the U.S. 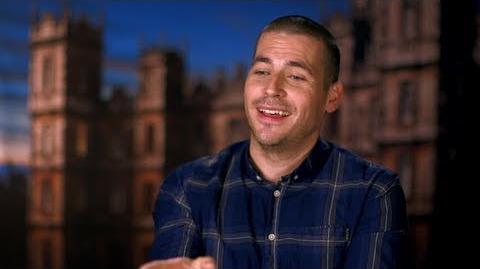 TheWrap.com Michelle Dockery Teases ‘Downton Abbey’ Movie Spinoff: ‘It May Not Be Over Yet’ Debbie Emery August 15, 2016 @ 9:21 PM