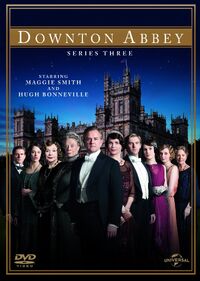 Downton Abbey - Series 3 is available on DVD and Blu-ray and contains series three of Downton Abbey. In the UK both the DVD and the Blu-ray were released on the 5th November 2012. In the US the DVD was released on the 29th January, 2013. Both the DVD and the Blu-ray contains three disks. They have been given a classification rating of 12 in the UK.

Note: This is a generic section  stub. Expand it by clicking Edit to right of the section title.
Retrieved from "https://downtonabbey.fandom.com/wiki/Downton_Abbey_-_Series_3?oldid=44336"
Community content is available under CC-BY-SA unless otherwise noted.