TO EVERYONE WHO DID NOT SEE SERIES 4 OF DOWNTON ABBEY UNTIL JANUARY 2014 (or later), THIS IS A WARNING: THIS WIKI WILL BE UPDATED AND EDITED AS THE EPISODES BROADCAST IN THE UNITED KINGDOM (SEPTEMBER - DECEMBER 2013)! PROCEED AT YOUR OWN RISK! THERE WILL BE SPOILERS ABUNDANT ON MOST OF THE PAGES! YOU HAVE BEEN WARNED!

Speaking of spoilers, be sure to check out The Upstairs/Downstairs Awards polls! Warning these polls include details on Series 4!

Downton Abbey is a British period drama that won a Golden Globe for best drama mini-series in 2012. It begins in pre World War I England. Each series will span several years, with the second series set to take place during and after World War I, and the third series to take place at the beginning of the 1920s.

Downton Abbey details the trials and tribulations of a family of nobility living on an estate called Downton Abbey, run by matriarch Violet Crawley, her son Robert Crawley, and his American wife, Cora. It also follows the lives of the servants on the estate, such as butler Mr. Carson and head housekeeper Mrs. Hughes.

Marriage and inheritance starts as a huge focus on the show, as the first season focuses heavily on Lady Mary Crawley's search for a suitable husband and her love for her distant middle-class relative, Mathew Crawley, who also happens to be a likely heir to the Downton Abbey estate and the title of Earl that comes with it. The second series focuses on the events leading through World War I. The third series follows turmoil surrounding the decline in the fortunes of the estate and the changes in the new decade. We also learn more about Cora's side of the family. 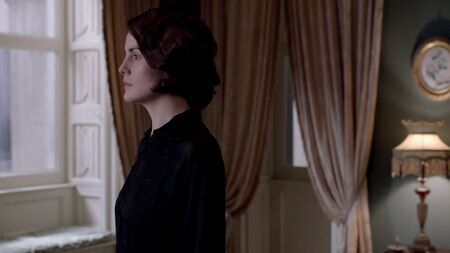 "You have a straight forward choice before you. You must choose either death or life."
—Violet Crawley.

Episode 4.01 is the first, feature length episode of series four of Downton Abbey. It received 10.5 million viewers in the UK, making it the most-watched series opener of the period drama.

In this episode viewers see Mary Crawley adjusting to her life and attempting to move on without the man she loved.

Set in February 1922, the episode opens long after Matthew Crawley's funeral. Mary and Isobel Crawley are still in mourning for him, especially Mary, who is still wearing black and is having difficulty bonding to her son George Crawley. Violet Crawley is determined to bring Mary back to the world, even Mr Carson telling her she's letting herself be defeated. Violet suggests Mary start to take an active role in managing the estate, with Tom Branson as her guide but Violet and Robert Crawley disagree on how best to see Mary through her grief.

Edith Crawley takes a trip to London and reunites with her editor and love interest Michael Gregson.

Below stairs, hearts seem set to be broken as Jimmy Kent finally takes an interest in Ivy Stuart. Mr Carson has an unwelcome reminder of his past and Mrs Hughes sees an opportunity to help a grief-stricken Isobel. Thomas Barrow is up to his old tricks, only this time he has the children's nanny in his sights.

"The truth is, I'll stay at Downton until you run away with me."
—Tom Branson to Sybil Crawley[src]

Retrieved from "https://downtonabbey.fandom.com/wiki/Downton_Abbey_Wiki/newfont?oldid=39248"
Community content is available under CC-BY-SA unless otherwise noted.