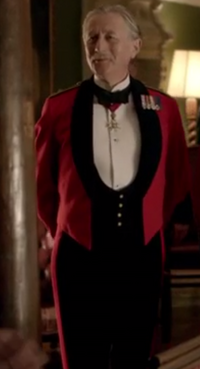 General Robertson is the General for the North Riding Volunteers who recruits Lord Grantham. He is probably aristocratic. Robert believes he is back in the army properly, only to find out he is badly mistaken as the position turned out to be entirely honorary.

Robertson is jovial and absent-minded. He doesn't notice Lord Grantham's discomfort at the news of his position being honorary.

Retrieved from "https://downtonabbey.fandom.com/wiki/General_Robertson?oldid=65701"
Community content is available under CC-BY-SA unless otherwise noted.