Tom: "Why wasn't Grantham House sold when Downton was in trouble?"
Edith: "It would have been, eventually. But not for nearly enough to save us."
— 2013 Christmas Special

Grantham House is the London residence of the Crawley family located in St. James's Square. It was built in 1849.

The Crawleys presumably stayed here every season before 1923 as well, including 1914, when they returned from Lady Sybil's 'coming out'.

In the 1920s, Robert Crawley lost a majority of the family wealth on a bad investment, which meant that the house would have eventually been sold along with the Abbey. However, when Robert's heir and son-in-law Matthew received a large fortune, the family was able to retain the property with a reduced staff.

The family stays there for the London summer season, which includes Rose's débutante ball.

After it is learned that Terence Sampson has stolen a love letter from the Prince of Wales to his mistress Freda Dudley Ward, Lord Grantham hosts a card game that Sampson attends while other members of the family search Sampson's flat.

Later, the Crawleys host a ball at Grantham House, where the Prince of Wales (later King Edward VIII) unexpectedly appears and asks to open the ball by dancing with Rose.

The family stays at Grantham House when they go to London for Lady Rose's wedding in Summer 1924. Arriving on the same day as them are Rose's father and mother, who, recently separated, have arrived from Southampton. This leads to tensions, as Rose's husband's father despises divorce. Meanwhile, Lady Flintshire attempts to call the wedding off by falsely incriminating Atticus by having him auspiciously photographed with a tart. An awkward dinner is held at the house before the wedding, and a reception afterwards. Guests include Lord Gillingham, Mabel Lane Fox and Lady Manville. 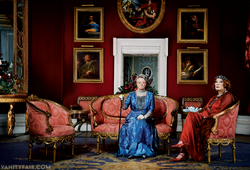 Retrieved from "https://downtonabbey.fandom.com/wiki/Grantham_House?oldid=68045"
Community content is available under CC-BY-SA unless otherwise noted.