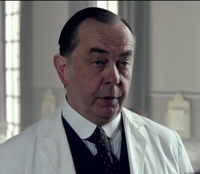 Violet: "And has Lord Flincher's order been acted on?"
Doctor: "It has. There's an ambulance waiting. Although, no one quite knows how you managed it."
Violet: "What exactly is the matter with him?"
Doctor: "His body's sustained too much damage. He cannot recover."
— Episode 2.05

The doctor is the doctor at the hospital in Leeds seeing to William. He informs Violet that his condition is terminal, however Violet stops him from telling William's father the severity of his condition. Saying that it is better to allow the blow to fall by degrees.

Retrieved from "https://downtonabbey.fandom.com/wiki/Hospital_Doctor_(Leeds)?oldid=51886"
Community content is available under CC-BY-SA unless otherwise noted.