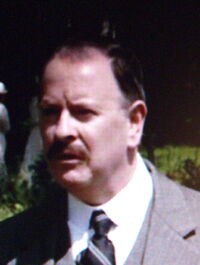 Inspector Stanford of York Police arrives in the middle of the cricket match with Sergeant Brand, approaching Robert and Carson, revealing that Alfred had filed a complaint against Thomas for committing a criminal offense for kissing Jimmy Kent. Homosexual acts being illegal, this would be considered assault.

He asks Robert to point out Alfred, but Robert says he will find him while Carson keeps the inspector from going with him, to Stanford's discomfort. Lord Grantham had discussed this issue with Bates and believed it to be resolved.

Robert confronts Alfred and persuades him to revoke his statement. Robert then tells Stanford that it was a misunderstanding. He says that Alfred saw some roughhousing and mistook what he was seeing due to his being intoxicated at the time. Stanford asks why Alfred made the phone call without checking the facts, and Alfred backs up Robert's version of events.

Apologizing for wasting time, Robert asks Stanford and his sergeant if they would stay for tea. Stanford declines and they leave, Stanford saying they "got the measure of it."

Retrieved from "https://downtonabbey.fandom.com/wiki/Inspector_Stanford?oldid=52047"
Community content is available under CC-BY-SA unless otherwise noted.