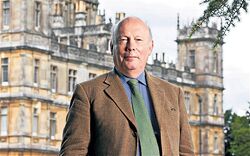 Fellowes is known professionally simply as Julian Fellowes and is an English actor, novelist, film director and screenwriter as well as a Conservative member of the House of Lords.

Fellowes wrote the script for the films Gosford Park (which starred Maggie Smith, Jeremy Swift, and Richard E. Grant), The Young Victoria, and also penned the best selling novel Snobs. As an actor he is perhaps best known for his roles in Monarch of the Glen and Our Friends in the North.

TheGuardian.com Julian Fellowes webchat – your questions answered on The Wind in the Willows, Downton Abbey, winning an Oscar – and Nando's Tuesday 13 June 2017 09.17 EDT