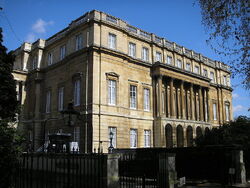 Lancaster House is a mansion in the St. James's district in the West End of London and was used to depict the interiors of Buckingham Palace in the 2013 Christmas Special of Downton Abbey. It is currently managed by the Foreign & Commonwealth Office and is situated close to Buckingham Palace.[1][2]

Lancaster House has been used for receptions and shows during London Fashion Week, and has been used as a filming locations several times. Various rooms have been used during the filming of The Young Victoria, National Treasure Book of Secrets, and Churchill at War.[2]

Retrieved from "https://downtonabbey.fandom.com/wiki/Lancaster_House?oldid=35676"
Community content is available under CC-BY-SA unless otherwise noted.