watch 03:27
Wiki Targeted (Entertainment)
Do you like this video?
Play Sound
This article is a stub. You can help Downton Abbey Wiki by expanding it (click Edit).

Her Majesty
Mary of Teck

Harold Levinson: "How was the Queen?"
Cora Crawley: "You know, she sort of sits there being Queen Mary-like."
— After Rose MacClare's presentation.

Mary of Teck is the queen consort of the United Kingdom and the British Dominions, spouse of King George V and the mother of Edward, Prince of Wales (the future Edward VIII), Albert, Duke of York (the future George VI), and Mary, Princess Royal.

Born Victoria Mary Augusta Louise Olga Pauline Claudine Agnes, her father was the Duke of Teck and her mother was Princess Mary Adelaide of Cambridge, a granddaughter of King George III.

Known as May within the family, she became engaged to Prince Albert Victor, Duke of Clarence and Avondale, the elder son of the future King Edward VII. However, Prince Albert Victor died of pneumonia six weeks after the engagement was announced. A year later, she became engaged to her late fiance's younger brother George. She would become Duchess of York and then Princess of Wales before her husband was crowned King George V. She would go on to bear him a daughter and five sons.

The Lady Rose MacClare is presented to the King and Queen at court during the 1923 London Season.

The King and Queen plan a visit to Downton Abbey in 1927 during their tour of Yorkshire. They send their servants ahead of them. Queen Mary's lady-in-waiting, Maud Bagshaw, is an estranged cousin of the Crawley family, and asks the Queen if she can go straight to Harewood House and not stay at Downton Abbey when she learns it is an intended stop. Maud informs the Queen that Violet Crawley feels Lord Grantham should be her heir. The Queen remarks on Violet's reputation but advises Maud that the family should know if they're to be "disappointed", so Maud accompanies them to Downton.

When she arrives at Downton, Lord Grantham tells her that her daughter and son-in-law will be attending the parade, to which she expresses relief but immediately tells Lord Grantham to forget what she said.

Queen Mary attends the parade and sits with her daughter, Princess Mary, and notes the absence of her son-in-law, Henry Lascelles (he and the Princess have a strained relationship). Princess Mary insists that she be allowed to leave Henry, but her mother refuses to discuss it at that moment.

At dinner, when Downton's staff serve, Joseph Molesley speaks out of turn and says Beryl Patmore cooked the food instead of Monsieur Courbet. The Crawleys are embarrassed, but the Queen forgives Molesley, and tells him to pass on their thanks to Mrs Patmore, which he gratefully accepts. She remarks to Lady Grantham that she and the King are used to people acting strangely around them.

Queen Mary is delighted when her daughter tells her during the ball at Harewood that she is going to try and make her marriage work, having been inspired by Tom Branson's words about "deciding what matters". She also congratulates Lord and Lady Hexham on the latter's pregnancy (Cora having spoken to her about it and how it would conflict with a tour the king wanted Lord Hexham to go on). 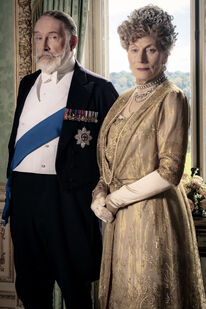 King George V and Queen Mary from Downton Abbey (2019)
Add a photo to this gallery
Retrieved from "https://downtonabbey.fandom.com/wiki/Mary_of_Teck?oldid=70226"
Community content is available under CC-BY-SA unless otherwise noted.