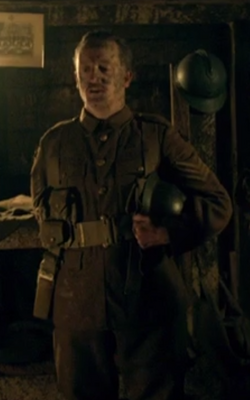 Matthew: "We were supposed to be at rest for ten days at least."
Medical Officer: "Orders arrived this morning, sir. [garbled] were hit bad, so they're out and we're in. And they've been shelling the trenches since we got here."
Matthew: "Anybody hurt?"
Medical Officer: "Rankin's dead and Kent. And Corporal Wright was hit. Thank God the stretcher bearers were there."
— Episode 2.01

Upon Matthew's return to the trenches during the Battle of the Somme, a medical officer provides him an update on the situation and casualties. His rank insignia indicates he is a sergeant.

Retrieved from "https://downtonabbey.fandom.com/wiki/Medical_officer?oldid=54643"
Community content is available under CC-BY-SA unless otherwise noted.