View source
watch 01:23
Wiki Targeted (Entertainment)
Do you like this video?
Play Sound 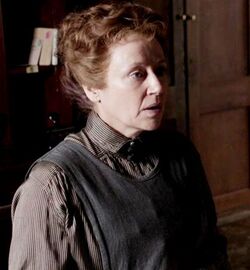 Mrs Wigan is the local postmistress, and runs the post office in Downton village along with the Postmaster. She worked there in April 1912 and was still working there in 1924.

In 1912, she and her husband recieved the fateful telegram telling of the Titanic's sinking.

In February, 1922 she took placement of an advertisement from Rose MacClare, who came to the post office asking how much it was to place a card in the window advertising a job. Edna Braithwaite later saw the card and asked the Postmistress for more details.

In 1924, Mrs Wigan was part of the village committee entrusted with erecting a memorial to the locals who had died during the Great War. She invited Mr Carson to the position of Chairman of the committe, since "Mr Carson knew more of the young men that died than [Lord Grantham] did".

Community content is available under CC-BY-SA unless otherwise noted.