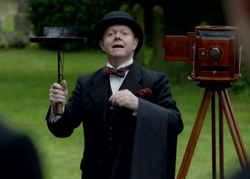 An unnamed photographer is present at the christening of Sybil Branson at the Catholic church in Ripon.

He first takes a family photograph her with her father, uncle, maternal grandfather ad grandmother, great-grandmother, paternal uncle and maternal aunts Edith and Mary Crawley, asking them all to form a group around the father.

Then he takes a photograph of Robert, Violet, and Father Dominic, which Robert and Violet find uneasy because Father Dominic is a Catholic priest but manage to do so.

Retrieved from "https://downtonabbey.fandom.com/wiki/Photographer?oldid=55578"
Community content is available under CC-BY-SA unless otherwise noted.