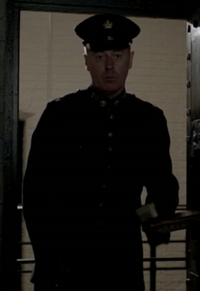 Turner: "These came for you Bates"
Bates: "When? When did they come?"
Turner: "They came when you were out of favour. Now you are in favour again."
— Episode 3.04

Turner is a prison guard appearing in several episodes of Downton Abbey. He brings John Bates his accumulated mail when he's "in favor" again.

Turner confided in Bates that he is not liked by another guard, Durrant, and warns him he should watch out for him.

Retrieved from "https://downtonabbey.fandom.com/wiki/Turner?oldid=52069"
Community content is available under CC-BY-SA unless otherwise noted.