Hi, welcome to Downton Abbey Wiki! Thanks for your edit to the Martha Levinson page.

Thanks for getting back to me (love your username, by the way).

It appears there's some discrepancy about Sybil's age, because in 1x07, Robert says Cora hasn't been pregnant for 18 years. Since assumedly he is talking about when Cora was pregnant with Sybil, that would mean she, Sybil, is 17-18 years old at that time. That episode was set in 1914, meaning Sybil would have been born in either 1896 or 1897, so Sybil would have been 22 or 23 in 2x07. You're right that Mary said she was 21 in that episode, but I think what she meant was that she was over 21. Either that, or Julian Fellowes just can't remember her age.

Hopefully we can get this worked out! Thanks again for getting back to me.

Does this perhaps help? I was able to find this on the internet. This is where I found it, so you can have a look yourself:

The three sisters were interviewed for the Radio Times at the end of last October before final Episode for S2 was aired in UK and set in early 1919.

P.S. Glad you love my name.

How can we assume that Robert has only one aunt simply based on Roberta being only mentioned on screen. Susan could easily be the daughter of another sister or Violet's brother. Violet mentioned Roberta in passing to make a point rather then an extensive family tree, but she never tells the Crawley sisters that Roberta was your one and only aunt. Also Major Gordon says he is connected to Downton Abbey, which is the Crawley family, so it's seems odd to assume that he'd be related to Violet, a Crawley by marriage, and therefore why would Edith tell him about an aunt who married a Gordon that was a Crawley relation. Also why couldn't Robert's father have been inherited the Earldom from his grandfather or his great-uncle since his father was already dead rather then father to son. I can assumed that Robert's father was the son of an Earl, but inherited from another relative since it would explain why Robert's grandmother lived at Crawley House in Downton village rather then the Dower House. I'm not saying the Earldom hasn't been passed down father to son in each generation, but I'm just saying he don't know either way so let's not assume since how Reginald and Robert are related isn't the same as how the Earldom has passed from one Earl to the next. That's what fanfic is for.CestWhat (talk) 03:19, September 2, 2012 (UTC)

Remember, Patrick Gordon ISN'T being Patrick Gordon, that's a false name - he's pretending to be Patrick and connected to Downton Abbey - and Edith NEVER states which side the aunt is on. The press pack (which came out at the beginning of the series), confirms that Patrick Crawley, Earl of Grantham, is in direct line; Matthew is the first time it's had to leave the main line.

Patrick's grandmother may still have been alive at the time of Violet's marriage and was living in the dower house, meaning her daughter-in-law (and Violet's mother-in-law) had to live in Crawley House.

We know, WITHOUT A DOUBT, that the way I show IS how they're related; we know this for three reasons 1) Violet says she doesn't want to see Downton go to a complete stranger - this would have happened BEFORE if Patrick had not inherited it from his father. 2) As I have shown on the tree, Robert's third cousin is Reginald - so since Patrick Crawley, Earl of Grantham is in direct line; he and Reginald HAVE to descend from 2nd Earl for Matthew and Mary to be 4th cousins and for Matthew to be Robert's third cousin-once-removed.HarryPotterRules1 (talk) 03:33, September 2, 2012 (UTC)

Again, Violet can easily have another sister or a brother who is the parent of Susan. The Gordon aunt can easily be totally unrelated to Susan or her mother. Robert is a direct-line descend from the 1st Earl doesn't mean that his father couldn't have inherited the earldom from his grandfather rather than his father. And Violet talking about a stranger isn't the same as a third cousin you've never met compared to a grandson of your dead son inheriting your estate before Violet even married the Earl of the Grantham. This isn't a situation where I'm saying I'm right or you’re wrong. You can dead right, but it's never said either way on the show and let's not assume. CestWhat (talk) 03:57, September 2, 2012 (UTC) Patrick is the FIFTH Earl; so, as shown by the picture I posted, it has to be a direct descent, otherwise a) Patrick would not be The Fifth Earl and b) Robert and Reginald would NOT be third cousins; that much is know, so please, stop removing it for heavens sakes! The picture shows that it HAS TO BE A DIRECT LINE for Reginald and Robert to be 3rd cousins; there is NO OTHER POSSIBLE WAY!

No other siblings of Violet are mentioned, and do remember, Robert would KNOW of his mother and father's family - Patrick, his father, had ONE sibling, a brother, who was the father of James and the Grandfather of Patrick who died on the Titanic. This, given that Robert never states he has any other aunts, means that Roberta, as the only aunt mentioned, must be the one Edith meant and must be the mother of Susan.HarryPotterRules1 (talk) 04:02, September 2, 2012 (UTC)

There are countless different ways how the Earldom has passed down. I'm agreeing that Matthew and Robert and third cousins, once removed. That isn't the same as who each of them is related the 2nd Earl of Grantham. Nor have you really shown how Roberta is named Gordon simply because another aunt isn't mentioned, doesn't mean no other aunt exists. Nor it shown that Violet didn't have a brother who could just as easily be Susan's father.CestWhat (talk) 05:02, September 2, 2012 (UTC) 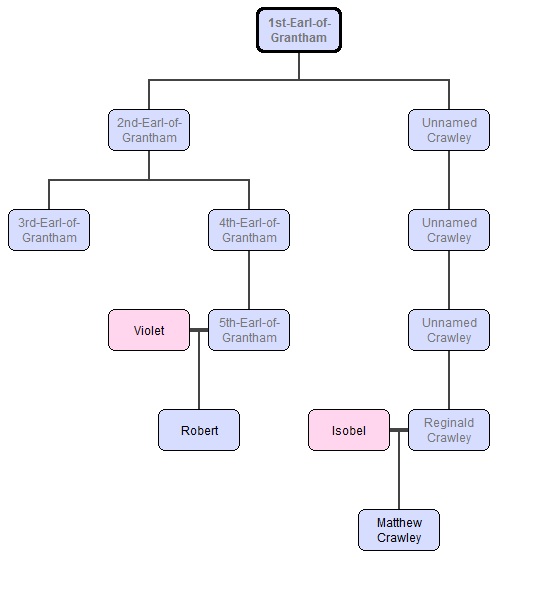 As you can plainly see here, THIS is how they are related; 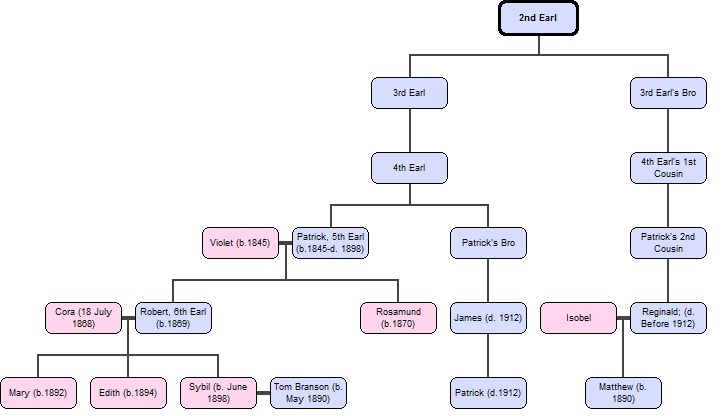 If the earldom had passed to a brother (or uncle, nephew, etc), then it would not be such an "OMG! STRANGER HAS TITLE!" moment, for Matthew to eventually inherit; this means it MUST be a direct line with no breaks since 2nd Earl. As well as this, it's stated by the show that Patrick is only inheriting because Robert has no sons. This, is the first time it's happened. --HarryPotterRules1 (talk) 05:20, September 2, 2012 (UTC)

No, I can't plainly see because my version is just as plausible. Again, a younger brother, a nephew or a grandson who you've known all your life are not "a stranger" in the way a third cousin, once removed you've never met is and also Violet only married into the family and therefore isn't speaking about things that happened generations before her time at Downton Abbey. CestWhat (talk) 05:24, September 2, 2012 (UTC)

This is the tree, or rather, what we definitely know:

Hey HarryPotterRules1. I created a forum about the adminship issue and the current adoption requests so that we can make a community decision and resolve the dilemmas between you and CestWhat. Hope to see you there :-) --AvatarRokusGhost 06:37, September 24, 2012 (UTC)

Retrieved from "https://downtonabbey.fandom.com/wiki/User_talk:HarryPotterRules1?oldid=13107"
Community content is available under CC-BY-SA unless otherwise noted.