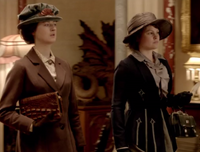 Two women giving out white feathers appear at a fund raising concert hosted by the Crawleys to support the war effort. The feathers were handed to able bodied males not in uniform, specifically William and Branson as an indication of cowardice. Robert has them thrown out.

In August 1914, at the start of the First World War, Admiral Charles Fitzgerald founded the Order of the White Feather with support from the prominent author Mrs Humphrey Ward. The organization aimed to shame men into enlisting in the British Army by persuading women to present them with a white feather if they were not wearing a uniform.

This was joined by prominent feminists and suffragettes of the time, such as Emmeline Pankhurst and her daughter Christabel. They, in addition to handing out the feathers, also lobbied to institute an involuntary draft of men, including those who lacked votes due to being too young or not owning property.[1]

Retrieved from "https://downtonabbey.fandom.com/wiki/White_feather_girls?oldid=52078"
Community content is available under CC-BY-SA unless otherwise noted.